Watching the game, catching a ball at the park, keeping a scorebook, getting an autograph, thinking right along with the manager, reading the box scores, cheering your team to victory, coaching, umpiring …. all wonderful parts of our national pastime  – but the greatest of all is actually playing the game.   There’s nothing like making the back-handed play at deep short, planting your foot and throwing the guy out at first, or making the catch in the outfield and gunning the guy out who was tagging-up.

Baseball has no time clock.  Between every play there’s time to think – or even day dream if you’re just a rec league softball player, which would be me these past 35 years, playing on several co-rec (men’s/women’s) teams as well as the Bluebirds, an all-male team with the same guys for all these years.

(I did make one last ditch effort to play hardball, trying out for the Twins with my long hair tucked up under my cap, but of course nothing came of it other than to brag that I’d hit pitches thrown by Tony Oliva. 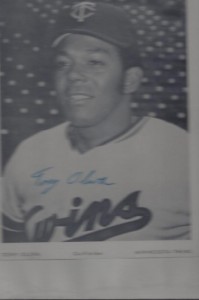 He gave me a fat one which, without a batting cage, might have reached the outfield fences – the ball glanced off the top pole of the batting cage and yet still traveled a good distance.)

There’s the sociability factor too.   Making life-long friends.  Summer nights after the game hanging with a dozen of your best friends.  And for some years the annual Nicaragua Benefit Softball Tournament to raise money to offset contra aid where almost two hundred of us like-minded souls would play and hang out for the day.

My favorite Bluebirds play came about in an unusual manner.  The other team was a player short and we all still wanted to play, rather than win by forfeit, even though a loss would take us out of first place.  So one of our extras needed to join the other team, but no one volunteered.  Since I was the Captain it had to be me.  In the bottom of the 7th the game was tied, the Bluebirds were out in the field, my adopted team had a runner on third with one out, and I was coming to bat.

A base hit and the game would be over and the Bluebirds wouldn’t be league champs.  Making an out on purpose, noticeable to the team I was playing for, would make me look like a traitor.  I just didn’t feel like it should be me that determined the outcome so I decided to intentionally loft a medium deep fly ball to McHugh in Left – that way a good throw by McHugh could nail the runner tagging-up at third attempting to score, and the game would head into extra innings undecided by me – and the other team would never know I made an out on purpose, actually two outs on purpose.  I hit it perfect.  McHugh caught it.  The runner tagged up and headed for home.  A good throw would nail him, but McHugh’s throw was just a little off, and I was a hero for the wrong team.