I started writing in hopes of getting my own two kids, teenagers Jack & Nick, excited about politics – hearing how much fun I’ve had along the way to leaving the world a better place, the old Emma Goldman adage, “I don’t want to join your revolution unless I can dance too.”

I figured the best way to reach them was to start with the fun stuff – albeit of questionable redeeming value.  I even dreamed my telling (or writing) (or YouTube’g) would evolve into a modern day version of Ann Landers for teenage boys, only I would go with the pen name “Andy Landers,” and win them over with my motto:  “Just because you’re not totally straight, doesn’t make you a crook.”  Once we caught on with thousands of hits a day being modern day “Flappers”* we would start a political revolution.  See my “Open Letter to Jack & Nick” which I wrote right after “Going to a Whorehouse and Not Getting Laid.”

*Flappers were the younger generation of women in the 1920s who flaunted their disdain for traditional values, smoked, drank, drove cars, voted and were okay with casual sex.

But my kids were skeptics at best and unwilling to share their teenage adventure stories about growing up.  Worse, their mom (my ever lovin’ wife Ellen) was vehemently opposed to the whole idea.  If I was going to tell the “Spin” story (about hitchhiking with my sister and meeting some rednecks), I had to leave out the drinking part, and – for sure – no tripping stories.  This was hard for me to take:  Andy Dawkins without sex, drugs and rock & roll.  I argued, “Hey, this may be the way to get our kids to open up.”  But I was met with “Keep it up and figure on a divorce.” 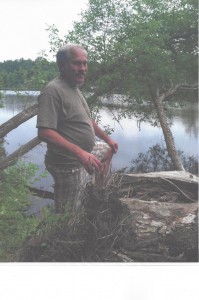 Andy on the St. Croix in 2014 pondering next stories

So, of course, I backed off.  But, I was so enjoying recounting all my wild adventures, I kept on writing and started to think about a new audience – maybe former hippies and politicos would enjoy reading about ourselves – and started to look for a publisher, marketing my book as a sort of Huck Finn meets Paul Wellstone set of adventures.

But again smack dab into reality:  No publisher magically appeared and the only ones I talked with said, “Yah, we can get you published.  You put up $5 to $10 k and we’ll deliver a thousand hard copies for you to try to sell.”  Since I wasn’t really into making money (although that would have been / still would be nice), I certainly was not into losing money.

Then miracle of miracles!  An old friend of mine, Tony Schmitz (a hippie in his day), got written up in the Pioneer Press about his self-published online book, Fatman Descends, short daily episodes via email delivery for free.  And Tony was willing to teach me how to do it.  Everything would be easy except getting subscribers (all of you readers).  So after ignoring Facebook for all these years I built up as big a circle of Facebook friends as I could.  And Yea!  The Black Dog Café agreed to let me come and tell stories on stage so I had an event I could post on Facebook and include an invite to subscribe to my book.

But smack dab into reality:  The Green Party drafted me to run for Minnesota Attorney General and once again I had to think twice about publishing stories that had even a little bit to do with being an outlaw.  “Hey,” I said, “this is the Jesse Ventura way to win an election – not just slogans, not just political correctness, but a real person, fun stuff and all.”  Only everybody on the campaign said they’d quit if I insisted on going forward.  Eventually we reached a compromise:  Delete every story that has anything to do with sex, drugs, rock & roll or being an outlaw.  Emasculated my book was launched August 18 but I couldn’t wait for the election to be over so I could publish the best stories.

Worst of all, instead of promoting the book as part of the campaign, my book launch got lost in the midst of traditional campaigning, and so to this day I keep running into old friends, hippies and politicos, who have no idea I’ve got an online book.  Those of you who are reading keep telling me, “Your stories are great!  Everybody should be reading them.”  But guess how many subscribers you all are?  First person who emails me back with the correct number wins a night on the town and a chance to be regaled with one or two “take to the grave” stories. 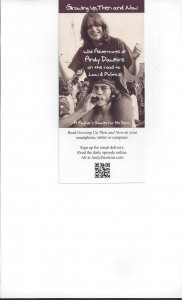