A Love Affair with Nine Innings

“Batting lead-off, playing shortstop, # 11, Dirt Dawkins,” thrilling words to a pre-teen aspiring big leaguer.  Later, when I didn’t make the cut for the high school baseball team, I cried on the spot.  But I couldn’t stop loving baseball – it just took awhile.  When the Brooklyn Dodgers (playing ball in Brooklyn you had to dodge trolley cars) left for Los Angeles, it took decades for some of their fans to ever attend another major league game – feeling betrayed as much as heart-broken.  My recovery time was shorter – like the allure of female companionship, I just couldn’t stay away.

I was born on the South Side of Chicago in the Minnie Minoso era.  By the time I was nine, Luis Aparicio, wearing # 11, was the White Sox all-star shortstop.  Batting lead-off he led the Chi Sox to their first crown (pennant) in 40 years, and the love affair commenced.  “Leetle Looie” was my first baseball hero.  On the playgrounds of Chicago, I was known as “Dirt” Dawkins. 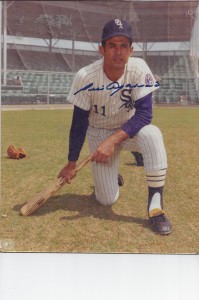 As you read this compendium of stories, listen to how much more is going-on than . . .

Baseball is such a thinking man’s/woman’s game.  The beauty of the game is so much more than athleticism.  As Yogi Berra said, “Ninety percent of the game is half mental.”  Like a beautiful woman, there’s much more going on than simply a shapely figure.  I’m still in the game at age 65, still finding great joy upon scoring.  Play Ball!