Juke Joints are whatever you want to imagine, they just sound good even before you see one.*  Red’s doesn’t look like much from the outside, no lights, just an old weathered sign.  Walking in, it’s like a basement, only on the first floor.  $5 bucks at the door and $3 bucks for a beer – help yourself out of the ice chest.  Red is lying on a couch watching the NBA on TV while the band is playing just to his left.  There’s no bartender, just a guy sitting in the audience to take your money, and no bar – just a bunch of tables and chairs and a counter stretching from front to back (maybe 25 feet) to set beers down on, all in a tender red glow of neon lights. 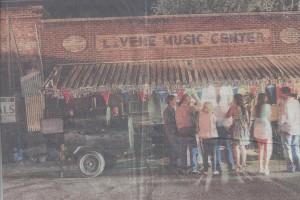 It’s crowded and rowdy and everybody’s friendly, like we’re all in Red’s living room and known each other forever.  There was Mariana from Mexico, a guy from Amsterdam, Celia from NYC doing a piece for NPR on the catfish farm inspection issue, a rock band promoter from Florida, and his girlfriend, and even another twosome from Minnesota, Pam & Grant, plus maybe a dozen others, mostly local denizens.  The Heather Crosse Trio was playing old time soul, R & B, Boogie-Woogie and the Blues.

From one end of the place to the other it was easy to start great conversations, and it really is the magic amongst the people as much as the music that makes a juke joint great.  Not as much dancing as I’d hoped, mostly just dancing in place, but then she walked in the door and I knew she was the one to ask to dance, beautiful, in her 30s and with her mom & dad – or so I thought.   Since the other two looked so much older I just assumed she was a wonderful daughter, bringing her mom & dad to see a juke joint.  Being the conversationalist I am, I thought I’d start with “This must be your mother and father,” but no, with a rather icy glare I learned it was her fiancé and a friend – so much for dancing.

Turns out the Florida couple had checked into the same motel as me & Rich, so we ended the night hanging with them.  Next morning on to Fred’s Lounge in Mamou, Louisiana, the Cajun music capital of the world, and another Dawkins faux pas, but that’s another whole story.  (Fred’s is famous for its Saturday morning dancing and has a sign, “No Standing on the Jukebox.”)