In the morning my mom would sleep-in while we all got dressed, made our own breakfast and got off to school.  When I started junior high I even made my own lunch to pack; and all of us during elementary school years came home and fixed our own lunch.  It was only as we were leaving out the front door for afternoon classes that Grace would wake up.  This was because she never went to bed before 4 am.  After she put us to bed the night before, and said good night to Jack (our father) in whatever way that meant, she’d spend the hours between midnite and 4 am living her own life reading, clipping coupons, sewing, darning, and so on.  Then she’d get her 8 hours in.

Once we were out the door after lunch, she had her own time again, to garden, until it was time to fix supper, which was always later than any other kids’.  Because we had no TV we always played outside after school, until the 7 pm yodel to come home for supper.  Talk about creating time to lead your own life and not be over-burdened with household chores!  As soon as I got my driver’s license I did my own laundry at the laundromat because the wringer washer in the basement left too many wrinkles. 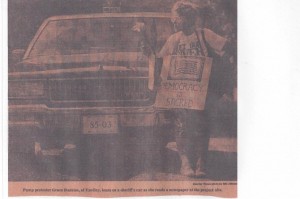 Whether a truck driver, a construction worker or a homemaker, Grace is loved by all because she’s so sociable, so funny, and such an intellectual.  She grew up in an IWW family where Ralph Chaplin, the balladeer, was often a dinner guest.  She was Secretary of her class at Wilson Junior College (as well as homecoming queen).  She had me read about Sacco & Vanzetti and Brown vs. the Board of Education at a young age.  And she never doubted I’d grow up to be somebody.

My good fortune to have such a great mom included learning frugality and not being materialistic.  The neighbors had Fords and Buicks and Cadillacs – we had a Rambler.  The neighbors went out to eat – we never did.  The neighbors had the newspaper delivered in the morning – we got my grandparents’ in the evening after they finished reading it.  And so dime by dime my parents saved enough for my college education.  It’s a huge gift they gave me – a chance to do whatever I wanted after college instead of having to re-pay a college debt.

I also learned kindness and generosity at home, treating others how you’d like to be treated.  When Maggie was back in the hospital for another long-stay (this time as a seven year-old for her second open-heart surgery), the nurses and doctors thought it remarkable that someone – with so much to feel misfortunate about – had no chip on her shoulder and instead brought out the best spirits in all the patients of all ages on the floor.  Way to be Maggie!  Good work Grace!

There’s so much more that could be said, I’ll end paraphrasing what Grace said to me as I left home hitchhiking to college in 1968:  “You don’t have to call everyday – we raised you to make it on your own.”