As she came trolling back I gathered up my belongings to make room, determined not to start any conversation because all I wanted was peace and quiet, have my lunch, read the paper, and let my thoughts drift.  No such luck.  She had a short skirt hiked way up high.  She had high heels.  She had a low cut sweater with bosoms ready to burst out.  She had bright red lips and very long, dark lashes.  I put the four folds of the paper right up to my eyes so we would avoid eye contact.  Lunch would have to wait.  About a minute out of the station she asks how I’m doing.  I ignore her -  although my brain was telling me based on experience ignoring would only lead to worse.  (She was already leaning forward to show me her boobs.)  Sure enough, ten minutes out of Indianapolis, she announces in a loud enough voice so everyone on the bus turned and looked, “I just gave this guy a blow job and now he won’t pay me!”  And what the people saw was me holding a newspaper up as if to avoid detection of any sexual encounter.  Everybody immediately faced forward and never looked back again.

Well, I couldn’t ignore her anymore.  I put down the paper and offered to share my sandwich.  Turns out she rode circuit hooking and was heading home to Nashville with enough money for her family for another month or two.  I was glad, however, when we finally got to Nashville and I could get back to being alone.  Not one passenger looked me in the eye when I walked down the aisle at the next stop – and I never even got a feel. 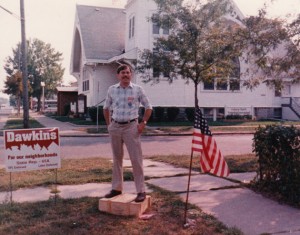 The one and the same guy a short while later

It was on the next leg to Orlando that I came up with the 96 team names ranked for aptness, although later on I learned they were originally Pistons going up & down the floor in Fort Wayne, Indiana – another city known for manufacturing car parts.   Orlando was another town I couldn’t wait to get to – not just because it was my destination – but because a little kid had taken over the hooker’s seat the stop after Nashville and barfed all over me just at daybreak two hours from Orlando.  One of those college kids had rolled me a joint for later, and I took a quick toke just before dawn in the bathroom keeping as much of the smoke as possible inside me.   Unfortunately dawn was when the kid’s dad, the kid’s younger brother (both sitting in the row right in front of me) woke up, as well as the kid who soon got sick, all to use the bathroom.  Dad blamed me for causing the kid to barf.