In God We Trust

Being a Philadelphian with a Saint Paul girlfriend made for the best summer of my life in my first 26 years.  In Philadelphia we were celebrating the 200th birthday of our Country with a “Bi-Centennial Without Colonies” national gathering of The Movement.  Annie was organizing two busloads of Minnesotans to ride all nite and arrive on the 4th for the celebration/demonstration.  I got the local food co-op to cater a hot meal for every Minnesotan as they got off the bus.  Then Annie and I ducked out to our favorite trysting spot – the King & Queen Suite on the second-to-top floor of the Drake Hotel on Locust Street.  We knew a way to leap from the top floor balcony to the balcony just below, which in the past had a suite accessible and unoccupied. 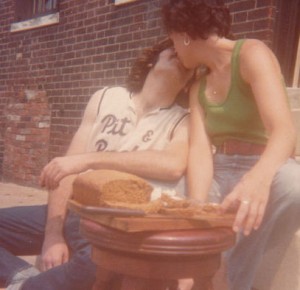 Off to a good start

Our joy making love was unbounded.  She was recently divorced and ready for all sorts of fun.  I was gaining experience being totally uninhibited.  Our longing for each other was intense after months of only letter writing.  Each kiss sweet and lingering.  Each caress filled with ecstasy and anticipation.  The way she whispered in my ear brought near delirium.  We came as one.  Then back to the gathering in Fairmount Park and the march to the Liberty Bell.

Next day we had tickets for the inaugural flight of the very first Sea Plane from the Delaware River (by the Liberty Bell) to the East River (by the Statue of Liberty).  We were packed, including Trout Fishing in America (our favorite book to read together), and ready to hitchhike from there (NYC) back to Minnesota via the Olympics (in Montreal).

When we got to the harbor in Philadelphia we were surprised to find Rev. Carl MacIntyre with a bullhorn and two dozen protestors holding red, white and blue balloons.  He instructed, “When I say ‘Let Go the Balloons,’ let go of the balloons.”  Our 20-seater plane’s departure was delayed because one passenger was missing so we asked the balloon holders what was going on?  Well, Queen Elizabeth of England was shipping a gift to America for the Bi-Centennial and it was due to arrive in the harbor in a matter of minutes.  It was a replica Liberty Bell – only she had left off the inscription “In God We Trust,” necessitating the protest.  Just as the balloons were being let go, our missing passenger arrived (an elderly lady with a miniature toy poodle) and we took off for NYC.  Good material for a Richard Brautigan short story we thought.*

*Or a joke:  This very particular guy designed a house that would take exactly 53,789 bricks to build.  When he finished there was one brick left, so he said, “Oh well, what’s one brick” and tossed it into the air.