First on the list was getting Leslie to the airport in Miami for her flight to Guatemala to be in her sister’s wedding, but along the way we stopped in Ormond Beach to scope out The Rescue Operation.  (Actually, our first stop was still in New Jersey.  We each put $50 on Black at the Roulette Wheel in Atlantic City and when it came up Black! we put the $300 winnings into a kitty on the dashboard to spend like it was free money.  Even a non-gambler like Leslie couldn’t resist the temptation of risking $50 to win $300 with even odds.)

We arrived in Ormond Beach about 8 p.m.  Just at the edge of town on U.S. 1, the main hitchhiking route between New York City and Miami Beach, there was a place called “The Community House” which had a little sign welcoming hitchhikers, runaways and vagabonds who needed a place to crash.  It was well known in town, and when we stopped in we said we were here to visit Bette Finlayson who was supposed to be living here.

“Oh yah, but she lives in The Big House about 5 miles inland,” they told us.  They were friendly about the whole thing, asked us if we needed a place to stay, gave us directions to The Big House, and told us all about “Big Red” who kinda ran the whole thing.  He was a former “one-percenter” (motorcycle gang member) who in a sort of born-again fashion had decided to build a community of throwaways (actually a harem, we suspected) and bought this big house where almost a dozen people (not all females it turned out) lived.

But before we went to The Big House to pick up Bette and deliver her safe and sound to her sister and family back in South Jersey, we needed to drive Leslie to Miami and deliver Fred her presents in Madeira Beach.  Miami had zip going on (except for scouting out SuperBowl tickets to scalp for a profit), and we were in a hurry to get to Madiera Beach on Florida’s Gulf Coast.   Let’s get these presents delivered so we can get going on The Rescue Mission!

But when we get to Madiera Beach it was such a great place that we actually stayed three nights before getting back on The Rescue Mission.  My sister told us to check out this great bar on the beach, Skip’s, where they had an outdoor pool table under a cabana right on the beach – and if there was one thing Bob and I were into, it was eyeing the babes walking up and down the beach.  (Remember, I always thought people were the prettiest flowers in the world.)  Better yet, we find out every night Skip’s has a bonfire on the beach where you could bring your drinks to.  And that’s how I ended up making out on a blanket  – although only a one-night stand that didn’t make it around the Bases.  First Base was wonderful enough all by itself.   Barely making it to Second was just a friendly good-bye, softly brushing her, and saying “Oh Baby, Can’t wait to see you again!” 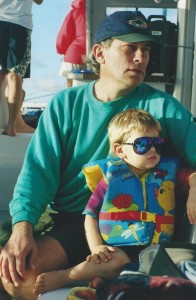 On the beach after rounding the bases with Ellen

Plus Fred was very accommodating and it was really great to see her.  I slept on the couch.  Bob slept in the Volare stationwagon parked in the driveway.