High Noon in Chattanooga.  A really Hot August day.  Stomachs filled, but hot and thirsty, we imagined the next car having a beer for us.  (We seemed good at calling our rides.)  Only minutes later a convertible pulled over.  Three guys with short hair and red necks.  Drinking beer. We looked at each other.  They looked like Red Necks.  We looked like Hippies.  But they had beer.  We got in.  “You want a beer?”  Sure we said, and guzzled them.  “You guys seem thirsty, should we get off the Interstate, find a bar and buy a twelve-pack?”  Sure we said (things were happening just as we imagined).  The bar was on the banks of the Tennessee River, “Do you want to take the scenic route and follow the River?”  Of course we said (what could be better?).  “Should we hold the place up or just pay?” they joked.

But it was no joke when we got back in the car and the guy riding shotgun pulled a shotgun out from underneath the front seat and started talking about “shooting niggers and scared rabbits.”  Murph and I nudged each other – a nudge which said it all:  Just imagine they’re not rednecks, we’re not hippies, it’s not 1972; we’re not in the Deep South; and maybe if we don’t act scared, don’t act as if we think they’re going to shoot us, think of them as nice guys showing us a good time, then maybe we’ll get out of this alive.  So we made jokes and said how great it was that they wanted to show us the scenic Tennessee River Valley. 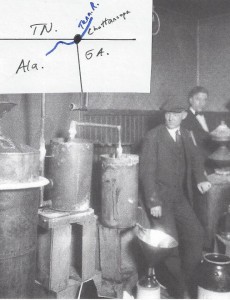 This imagining we’re safe got a bit tougher when the driver pulled out a switch blade and flicked it in front of the rear view mirror with a glint in his eye sharper than the knife looking straight at me in the mirror.  I was sitting in the back seat in the middle with my army duffle bag in my lap.  My sister was on my left (although they didn’t know it was my sister).  The third guy was to my right.  We were all drinking.  After a stretch it was time for a piss-stop.  They turned left onto a dirt road and drove until there was not a soul nor a house in sight.  We all got out.  Yea!!! This is the time to run!  But No, we were on a hilltop, the guy was taking a pee with his left hand and cradling the shotgun with his right.  We were the scared rabbits!

So we all got back into the car.  Then the driver and the backseat guy got out and opened the trunk and had some type of a conversation.  Then the backseat guy got back in and the shotgun guy got out and had a conversation with the driver.  This gave me an idea.  Since they were making plans that didn’t include us, it would be perfectly normal for me and Murph to make plans that didn’t include them.  When everybody was back in the car I was just about to open my mouth and say “it’s been great, but we need to start making some better time, could you get us back to the interstate?”

But I never got the chance to.   The guy in back beat me to the punch.  Nudging me on the elbow he says, “Say, the driver wants to take your girl for a spin in the woods, you got anything to say about that?”  Without missing a beat, without any hesitation, I said, “No, I’m not going to let him.”  (I’ve always wondered if I would have said the same thing if it wasn’t my sister – I sure hope so.)  Well, in that split instant the driver swings his arm over the front seat and I imagined the switch blade coming and my life passing in front of me.  But instead he shook my hand and said, “You know kid you’re ok  – if you were some sissy hippie and hadn’t stuck up for your girl we were going take you out in the woods and beat the shit out of you to teach you a lesson.   Listen, we got to get back to town; we’re dropping you off at the interstate just over the hill.”

When we get out of the car and they were out-of-sight my sister and I leaped for joy higher than I’ve ever leaped in my life – and wished that the next driver was some hippie smoking pot.