Another reason to get married was to have kids.  Jack was born with Ellen’s tiny wrists.  Nick has his Grandpa Rinkema’s genes – Grandpa Rinkema wore size 16 shoes.  When they were both just old enough to play baseball I had nicknames picked out already:  Jack Ruth and Nicky Mantle.  And I’ve enjoyed coaching them and their friends on how much fun baseball is.

When Jack was 8 and Nick 6, Nick was big enough and good enough to “play-up.”  Playing-up is when a younger kid plays organized ball with an older cohort.  I’ve always been a bit leery of “organized baseball” and its adult influence.   All I really wanted for my kids was to play with their friends without any adults present, without any pressure to perform well in the eyes of a coach, without any umpires to make the calls  – figure out for yourselves who’s safe, who’s out, what’s fair.

The very enlightened suburban Chicago town I grew up in banned Little League* for these very reasons.  Instead we had the “Western Springs Recreation Program” where the kids got together and picked their own teams for the summer, played a full schedule of games in the mornings (sans official uniforms and adults), and paid high school kids to be the instructors and umpires, but not coaches.  My age group was a particularly talented bunch and we did form a traveling all-star team to occasionally play Little League teams in other towns – I remember one game we won 51 – 3 in three innings.  So there was some regret that we never had the chance to be an official team that might make it to the Little League World Series in Williamsport, PA.  My belief that we were good enough was vindicated when my high school team won the state championship – but that was without me – see Broken Heart story between 1st and 2nd Innings.

By 2005 a group of kids playing unorganized ball had gone the way of playing pepper – it just wasn’t happening.  No more neighborhood schools to walk to and play before the school bell rang.  Moms not wanting kids to go to the ball field (six blocks away) unsupervised after school.  But I tried to fight all that.   Me, Babe, Nicky and the neighbor kid playing in the front yard resulted in a broken window at the neighbor’s.   We brought a home-made backstop and cardboard bases to the open field a block away but we couldn’t attract enough for a game.  I did get the City to start a “Morning Little League” modeled on the Western Springs rec program, but that only lasted a year and wasn’t all that great because 6 year olds were lumped together with 10 year olds – skill sets too disparate.

It was about that time that Babe (Jack) did a very smart thing.  He could see where his younger brother, already bigger than him, was going to be better than him in baseball – so he became a skateboarder.  Someday, maybe already, I hope Jack knows that I think he’s a great skateboarder, just as great as being a great baseball player.  In fact, skateboarding has a huge advantage over baseball for being a favorite of mine because skateboarders are unorganized and don’t need adults (or want adults) to be around. 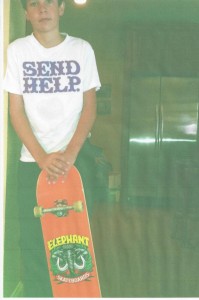 But Jack knows I love baseball so much and maybe – despite my assurances otherwise – thinks he’s let me down by not caring for the game.  You haven’t Jack!  I think you’re the smartest, best kid in the world – tied with Nick.

Meanwhile, Nick has truly developed into a ballplayer worthy of having a nickname associated with one of baseball’s all-time greats, the New York Yankees’ Mickey Mantle.  Better than me, he’s the star pitcher on his high school team.   This past fall he was recruited to be on a nation-wide traveling team.  In St. Louis he pitched his “Jack Morris game.”

Jack Morris grew-up in the Highland Park neighborhood of St. Paul and went on to become a Hall of Fame pitcher for the Detroit Tigers.  Coming back to Minnesota in his fifteenth season, he was the hero of the 1991 World Series when he pitched a decisive, seventh game, ten inning shut-out (no runs) to defeat the Atlanta Braves.  The game was tied 0-0 going into the bottom of the 9th, and after the Twins didn’t score in the bottom frame, Manager Tom Kelly was thinking Jack’s tank was empty – maybe time to bring in a relief pitcher for the extra innings.  But one look at Jack and Manager Kelly changed his mind.  Jack was fiercely determined to finish what he’d started.  Jack got the side out in the top of the 10th 1-2-3 and then Gene Larkin knocked in Dan Gladden from second in the bottom of the 10th for the title. 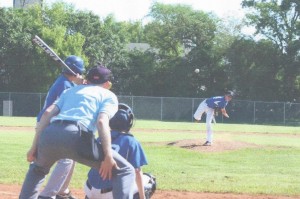 Nick had a perfect game going into the top of the 7th.  (Remember 7 innings is a regulation game in high school.)  A perfect game is when every batter up, every batter out.  After 18 batters, no walks, no hits, no errors.  Coming to bat in the top of the 7th with his team leading 4-0, Nick got plunked in the arm by the opposing pitcher.  Nick’s a righty pitcher, and it was his left arm so he could still throw – sort of.  A pitcher uses his whole body to pitch.  Being able to twirl upwards with both arms in delivering a pitch is critical to getting your whole body into the pitch and getting the ball up to the plate with any speed.

Going out to pitch in the bottom of the 7th Nick could hardly raise his left arm without debilitating pain.  The other team got two runs as Nick struggled to get two outs.  Then they got a runner on second and the tying run came up to the plate.  Much like Tom Kelly and Jack Morris, Nick’s manager called time and strode to the mound thinking it was time for a relief pitcher.   But all of Nick’s teammates came to the mound too and said this was Nick’s game to win or lose – let him finish.  Nick got the next batter out stranding the runner at second.