I’ve got the short one

It was standing room only at the Turf Club so I took my drink with me to the can and set it on top of the urinal.  The guy next to me comes in and does the same thing.  As he’s peeing and holding his pecker I said “I’ve got the short one” – meaning the drink, but that’s not the way it was understood – which is not the first time I’ve been misunderstood sex-wise. 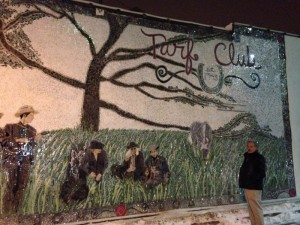 The University Avenue Scene – a place to (barely) meet other men

Living in Philadelphia in my Center City efficiency one of my great pleasures was gazing out the window at the bustling street scene below, and when I secured a storefront law office on University Av. in St. Paul, with an upstairs apartment to live in (short commute down the stairs and no need for a second telephone line), I couldn’t wait for the first night I could prop my feet up on the window sill and gaze at the traffic passing by.

The Twins were on the radio.  I popped a beer, opened the screen, and had my bare legs (wearing cut-offs only) half out the window.  It was still the top of the first when this car pulled up right under my apartment window and right next to the plate glass window with my law office sign and tel. #.  After a minute I leaned over and glanced out the window.  This guy had slid over to the passenger seat, pulled his pants down to his knees, and was whacking-off gazing straight up at my legs!  The same split second I glanced and saw all this, I yanked my head back in and slid off the chair so I couldn’t be seen.

Waited a minute and crept up to the window to take another peek.  He’s still there looking up.  For the next few minutes I could only crawl around my apartment to avoid observation.  Finally the car drove away . . . . whew.  But he just made a U-turn at the corner and went to the phone booth across the street . . . . and then my phone rang!  He had taken down my phone number! . . . and was now gazing at my window holding the receiver in his hand 25 yards away!   Now I couldn’t even answer the phone in my own house, or stand up!  Finally he hung up and drove away, but that ended my listening to the Twins game with my legs dangling out the window.