Back in the Corvette, I’m driving again and she says, “Wherever you want to go.”  Knowing this great bar with an outdoor fire pit, clear on the other side of town (to give me plenty of drive time), I head there.  She then pulls out a little cocaine to sniff.  I was never much for coke, but every once in awhile.  We continue to have a great time.  Even a long passionate kiss by the fire pit before we get back in the Corvette. 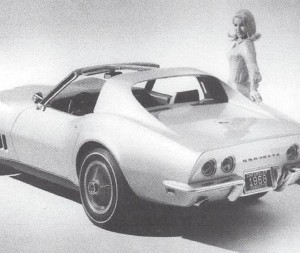 Heading back to the Cities there’s little traffic so I put the brights on.  When we get to Hwy. 36 and Rice St. I’m getting a little nervous because . . . no, not what we’ll do next . . . because I can’t get the brights off and we’re sure to get stopped with me (not likely) slightly over the limit, and Cyndi doesn’t know how to turn them off either.

But I know there’s a cop station just a few blocks south on Rice and I figure some cop there will know how to turn the brights off on a Corvette.   We pull in.  Sure enough one of the coppers is willing to come out and give it a try.  He can’t get them off either, so he radios to all the squads out on the street, “Anybody know how to turn off the brights on a ’68 Stingray?”  Nobody has any better idea than the copper who’s with us, so he gives it one more try and then says, “Well good luck, drive safe.”

After that, I have no more worries about getting pulled over – every squad we pass either honks, waves, or flashes us its brights in a friendly way.  The next time we talk Cyndi explains it was her other boyfriend’s car and when she returned it the next day he explained he customized it so you could turn the brights off by just nudging the side door with your left knee.