So me and this guy walk back through the narrow passageway, but when I get to the room with the cash register I think “What am I going to tell the guys at the bar?”  So I sit in one of the couches.  While I’m thinking about what to do, sure enough in walks this father/son team and the father says “Son, today you’re going to be a man.”  [It’s certainly worth asking if this is the way you want to become a man.]  Shortly, Delton comes flying by with a ruddy face and says “Your turn.”  So I get up and walk back through the narrow passageway.  They all laugh again.  “How old are you anyway?” one of them says.  Twenty-one said I in a squeaky voice reaching for my ID.  They laugh again and somebody says “She’s back that way [pointing].”

So I walk through another narrow passageway and this woman pops out of a room saying “get in there and take your clothes off – you better be better than that last guy!”  “Whew,” I thought “she won’t see I’m not wearing any underwear.”  I quick take my clothes off and she comes back with just panties on.  The room is dark.  There’s a bed low to the floor with a red light on the headboard, a low ceiling and a low-slung sink.  No windows.  “Come over here,” she says, and then she washes off my penis.  While she’s doing this her boobs are hanging right in front of me and I figure now’s the time I should be getting a hard-on, so I feel one of her tits.  “There’ll be none of that!” she says and slaps me across the face.  [“Tuuu” is what a backhand across the left cheek sounds like.]

Then she takes this little bottle of disinfectant, uses an eyedropper, uses the thumb and forefinger on her other hand to split the top of the head of my penis, and puts a couple drops right on top the slit.  Then she whips off her panties, jumps in the bed, and says “Come on.” 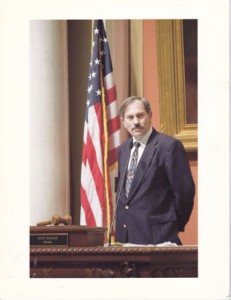 Well… I sit down on the edge of the bed and mumble “Ehhh, you know I’ve never done this before.”  “Oh for chrissake!” she says, “Just get on top of me and rub around a little.”  So I roll over on top of her, immediately keep rolling right over her, sit up on the other side of the bed, and say “I just don’t want to do this.”  I’ll be forever thankful for what happened next.

For some reason she decided to have sympathy:  “You know, you really don’t want to get a hang-up about this not getting laid.  It’s maybe better to not lose your virginity in a place like this.”  Then she told me she was a student at Whitewater State but ran out of money to pay for college and heard about this place where you didn’t have to worry about anything, a place she could work for a year and save enough money to go back to school.

Meanwhile, I was fretting about getting dressed in front of her (remember, no undies) so we kept talking and I asked her what that dripping was from the ceiling.  That’s when I found out Delton didn’t get laid either.  He had refused to let her do the eyedropper thing and dashed the bottle against the ceiling.  That’s why she had left the room (to get more disinfectant) and that’s why she’d said “You’d better be better than that last guy” – she was angry about missing breakfast for some punk kid who didn’t want to cooperate . . .  with another one yet to deal with.

Heading back to Chicago, unfortunately, I told the guys that I didn’t get laid.  This embarrassment was part of the reason for choosing a college that no one else from my high school was going to – but generally I just needed to turn over a new leaf.  By the time I actually did lose my virginity in a cabin on Green Lake in the Fall of my sophomore year, it no longer seemed so embarrassing, and I was telling the story of Godley, Illinois to quite a few others, finding the girls, in particular, loved the part where I concluded that the moral of the story is that you don’t want to lose your virginity in a whorehouse.   What do you boys think about this, the world’s oldest profession?  Should it be illegal?  What about the role of pimps?

P.S.  It does take some confidence in your masculinity before you can tell a story like this, but I promise you that even though it seems like forever to get through high school, and even though having confidence about being masculine is not easy to come by in high school, this lack of confidence at that age is real common.  It’s what leads to so much braggadocio, fisticuffs, beer-chugging, fast-driving and worse.  The best I can tell you is that it’s okay to wait for the right girl to come along, that it happens soon enough, and that in retrospect those few years of high school are a very small part of your life.  Just don’t do something so stupid that it messes-up the rest of your life.  Don’t get in a car with a drunk driver.  Be smart enough and grown-up enough to say No to some things.

P.P.S.  By the way, losing your virginity is a great thing to say you’ve done it – but the actual event takes some practice before it’s a great thing all by itself.  Enjoy the practice.  Let me know how it’s going if you want.  Oh, when I privately told Delton I knew he didn’t get laid either, he denied it and I had to let it go because otherwise I’d have to explain everything.  Now I wonder what Aho is doing and whether or not he regrets having lost his virginity in a whorehouse.