In Jack’s case the humor was more intentional, but occasionally being shocked and surprised is another joy of parenting.  Ellen was a legislator like me.  (For how we met, read “Third Time’s The Charm.”)  The legislative policy debates during much of Jack’s pre-school years included paying for a light rail line and “concealed carry.”  Ellen was a leader in fighting against the carrying of concealed guns in public.  During the debate on final passage, she evean snuck a prop on to the floor (against Senate Rules) and dropped this 20 lb. Oxford Dictionary on her desk with a loud Bang! while asking her colleagues:  “How many gun-toters would have reached for guns upon hearing an unexpected loud retort in a public place?  More guns means more danger for innocent bystanders, not greater safety.”

Sen. Anderson (she kept her maiden name for many reasons) has always been really great and skillful at debating and it’s a pleasure to watch her work.  She once debated an ex-professional wrestler turned radio talk show host and later Governor of the State on his radio show about her bill forbidding males from running in the women-only marathon to raise money to fight breast cancer.

The talk show host starts with “My wife wants me to ask you why you’re sponsoring such silly legislation when there are so many more important things to be working-on, like crime, welfare and taxes.”

Without skipping a beat El gives him an answer which brought silence to the airwaves (a cardinal sin for a talk show host).  She says to him:  “You know, I called your station several times to talk about crime, welfare and taxes, but no one ever called back.”  After a long, embarrassing (for him) silence, he sputters something along the lines of “you can’t blame the media” for what gets reported! 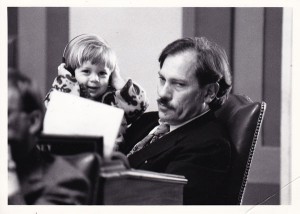 Where did Jack learn to give a good speech?

At any rate, Jack was fond of going to political events at a young age, and telling everyone “We need more trains in Minnesota, less guns and more merry-go-rounds.”  When he was six, Ellen and the neighbors had a community celebration because the City Council had just denied a permit for a gun shop in the neighborhood.  Sure what Jack would say, El hands him the microphone and asks if he’d like to say something.  In a sort of had-to-have-been-at-his-prior-speeches way, he said “We need more trains in Minnesota . . . and we need more guns!”  Ellen had to add the context, the humorous intention, and shock turned to laughter.